Vanquish vs. CoolSculpting: Which Treatment Is for You?

Vanquish vs. CoolSculpting: Which Treatment Is for You? 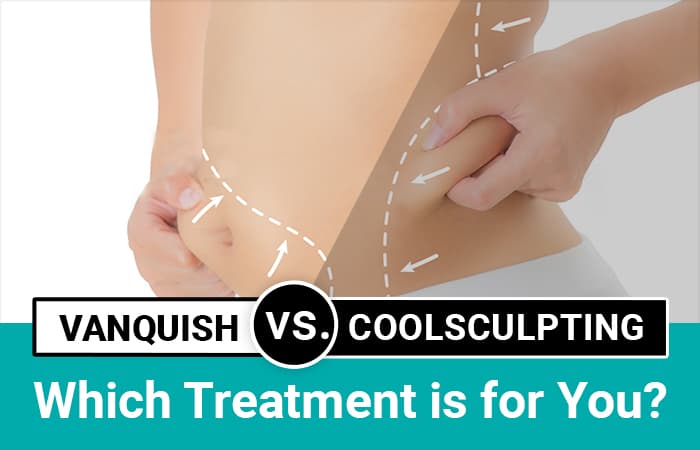 Have you tried everything you can to lose unwanted belly fat, but nothing seems to be working? You’re not alone. Most people struggle to lose the extra fat, especially as they become older. But we have good news! You can get rid of your trouble areas without having to go under the knife.

There are two popular ways to remove stubborn fat – Vanquish and Coolsculpting. These devices are proven to permanently destroy fat cells to reduce localized fat. And the best part? There’s zero downtime involved.

So, which treatment is best for you? Keep reading to compare the differences.

You know exactly what we’re talking about when we say stubborn fat, don’t you? It’s the extra area of fat on your stomach, thighs, or another area that just won’t go away no matter how hard you exercise. If you have this, you’re not alone. In fact, a lot of people struggle with it. There are several different reasons behind this frustrating fat:

A lot of things happen as we age, and unfortunately, losing weight sometimes isn’t one of those things. Sometimes it’s due to the changes in hormones that come with aging, or it could be changes in the metabolism. Or honestly, time could just have a lot to do with it. Let’s face it – as we age, we have kids, and sometimes we just don’t have time to fit exercise into our daily schedule.

Sometimes we can’t lose fat in specific areas because genes can play a role. Some people are just stuck with excess fat deposits on their stomach, thighs, and other areas, and they can’t get rid of it no matter how much they exercise or how well they eat.

If you’ve tried everything and you can’t seem to slim down, you don’t have to struggle with it. CoolSculpting and Vanquish can help! These treatments can give you the body you’ve been trying to get but haven’t had any success on your own. Whether it is a fat pocket on your stomach that’s bothering you or thighs that won’t tone up as you would like, you can have these treatments done just on those areas to permanently get rid of the problem. It’s really that easy to get rid of the fat that you’re fed up with!

How Does CoolSculpting and Vanquish Treatment Work?

Each treatment uses its own unique technology to permanently zap away unwanted body fat. Here’s how the two treatments differ:

This is actually just what it sounds like. A cooling technique is used to freeze your fat cells away, which leads to a sculpted look.

Here’s how it works: an innovative device is used to lower the temperature of the cells in the area where you want to eliminate the fat. Only the cells in the targeted area will be impacted, no other tissues will be harmed. Once the cells reach a certain temperature, they will die and leave the body. After the dead cells leave the areas, then you’ll be left with a sculpted, more toned look.

This technique is actually the opposite of CoolSculpting. Instead of freezing the cells, this process is all about heating things up.

During the Vanquish fat removal treatment, a dermatologist uses a device on your problem area that sends radiofrequency energy to the area. This will cause the underlying fat in that area to heat up and kill the fat cells. Just like CoolSculpting, the dead cells will leave the body to show a slimmer look.

What Problem Areas Can be Treated?

Here are the most common areas that are used for each treatment:

How Do I Prepare for These Treatments?

The first step to either of these treatments is to have a consultation with an expert at Winston Salem Dermatology. During the visit, we take a look at your body and see what areas that you want to see improvement. We’ll also go over your medical history and find out what types of medications that you’re on. This information will help us determine which treatment option will give you the best results.

What Happens during CoolSculpting and Vanquish Treatment?

The great thing about both of these treatments is that they are non-invasive. They are both quick and easy so, you’ll be back home in just a couple of hours or less!

Here’s what you can expect during both procedures:

This process is so quick and easy, most people talk on the phone, get work done, watch television, or even take a nap during treatment!

A machine will use suction techniques to cool your target areas. The entire process takes several hours, but you’ll be completely comfortable while it’s going on. As your body becomes numb, you will be able to relax during the treatment.

Vanquish is a little quicker than CoolSculpting, it usually only takes about 45 minutes. It’s comfortable too, most people read or take a nap while they are being treated.

During Vanquish treatment process, the machine won’t actually touch your body, it will be put a few inches away from the skin. The device will use radiofrequency energy to target the areas where you want to see results.

Not only are these treatments quick, but they are easy on the body too. There’s no downtime. In fact, most people go back to work or return to other normal activities right after they have the treatments done.

How Many Treatments Will I Need?

This is a difficult question to answer without knowing your body type. That’s because each treatment plan is unique to each person. Typically, patients have multiple treatments done until they’ve achieved their desired results.

Winston Salem Dermatology will help you personalize a plan to make sure you see the exact results that you’re looking for.

When Will I See Vanquish and CoolSculpting Results?

One thing that you will need for these treatments is patience. That’s because the results aren’t instant. You have to give your body time to get rid of the fat cells that were killed during the treatments.

It’s common for most people to have four Vanquish treatment sessions. Most people start noticing improvements after the second treatment, but they achieve their full results several weeks after the fourth treatment is done.

One of the most appealing things about these treatments is the costs. You aren’t paying the hefty price tag that you would for liposuction or a facelift, yet you’re still getting permanent results.

The prices for these two treatments don’t really differ that much. A personalized CoolSculpting treatment plan can cost anywhere between $2,000 to $4,000. For Vanquish, you’re looking at around $2,400 – $4,000 for the four-treatment package.

Of course, this all depends on the size of the area that you’re having treated. The smaller the area, the smaller your bill will be.

Winston Salem Dermatology will work with you to make sure you’re getting the areas you need to be treated at a budget you can afford.

Are These Treatments Safe?

These treatments are very safe. Both treatments have been approved by the FDA to remove fat cells without the need for surgery.

With CoolSculpting or Vanquish treatments, you’ll be able to reduce fat cells in your problem areas without the need for surgery or a long recovery time.

If you’re ready to permanently get rid of your problem areas, we are ready to help. We believe there is no better time than now to invest in your skin. Our team of professional skincare specialists are ready to help you feel good about your body with the help of CoolSculpting or Vanquish. Call us today at (336) 774-8636 to find out how we can personalize a plan to give you the body you’ve been dreaming about.