Melanoma is a result of pigment-producing cells that continue to grow uncontrollably, also known as melanocytes. While melanomas may sometimes appear on the skin suddenly without any warning, they can also develop within an existing mole.

Advanced melanoma can spread to your lymph nodes and internal organs, becoming fatal if not taken care of. In fact, there is one person to die every hour in the United States from melanoma. Fortunately, if melanoma is detected early on and treated before it can reach the lymph nodes, the survival rate increases to 99%.

The risk factors for developing malignant melanoma include a family history, having a history of severe sunburns, atypical nevi, skin that easily burns, freckles, doesn’t tan easily, having naturally blonde or red hair, or having blue or green eyes. While some of these statistics may seem crazy, they have been proven true.

Environmental factors are also important, such as living at a high altitude or in an extremely sunny climate, being exposed to sunlight often, or using tanning beds. 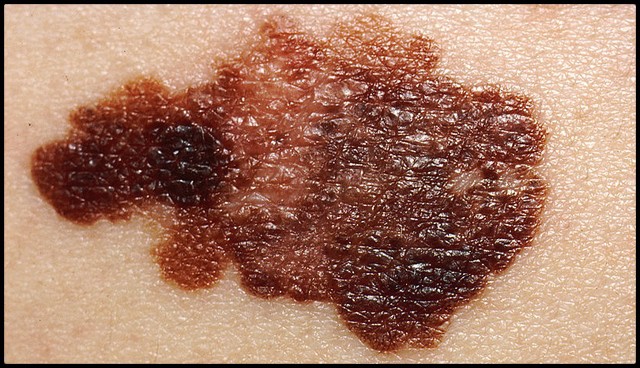 How Dangerous is Malignant Melanoma?

When detected early on and treated properly, malignant melanoma is usually curable. However, once it has spread into deeper layers of the skin and other parts of the body, it can become more difficult to treat and can even be deadly. When it is detected early, the estimated five-year survival rate for patients in the United States is around 99%. But research has found that an estimated 6,850 people in the United States will die from melanoma in 2020.

There are four main types of malignant melanoma of the skin, each type varying based on your risk factors and the severity of the condition.

This is the most common type of melanoma to be diagnosed among patients. It can live in an existing mole or appear as a new lesion on your skin. When it starts in an existing mole, it tends to grow on the surface of your skin for quite some time before going any deeper. And while it can appear anywhere on the body, it’s most likely to show up on the torso of men, legs of women, and the upper back of both. You should keep an eye out for any flat, slightly raised, or discolored, asymmetrical patches that have uneven borders. Their colors vary from tan, to black, brown, red or pink, blue, or even white.

This form of melanoma develops most often in older people. When it becomes invasive or spreads beyond its original site, it becomes known as lentigo maligna melanoma. At first, this type of cancer will grow close to your skin’s surface, typically on sun-damaged skin, the face, ears, arms, or upper torso. It will also appear as a flat or slightly raised, blotchy patch that has uneven borders. Its colors range from blue and black, to tan, brown, or dark brown.

This type of melanoma is most often found in African Americans. It can be harder to find as it usually shows up in places such as under your fingernails, on the soles of your feet, or the palms of your hands. Depending on its severity and location, it could appear as a black or brown area.

This is the most aggressive form of malignant melanoma. It can account for 10 to 15 percent of all melanoma cases. The tumor will grow deeper into the skin and more rapidly than any other form, frequently found on top of the torso, legs, arms, and sometimes the scalp of other men. More often than not, by the time it is found and diagnosed, it is already invasive. This form of melanoma is often recognized as a bump that appears on the skin, often black or blue in color, but not uncommon to appear pink or red either.

Melanomas can develop almost anywhere on your body, most often in the areas that have been exposed to the sun, such as your back, legs, arms, or face. They can also appear in areas that aren’t as exposed to the sun, like your feet, hands, or fingernail beds. However, these hidden melanomas are most common among people who have darker skin.

The first signs of developing melanomas can vary; however, the most common symptoms include those we’ve listed below.

One of the most common causes for melanomas is when a mistake happens within the melanin-producing cells that give your skin its color. Normally, skin cells will develop in a controlled process where healthy cells push older ones towards the skin’s surface. However, sometimes these cells develop DNA damage, making the new cells develop uncontrollably and cause a mass of cancerous cells.

It isn’t exactly clear what DNA damages lead to melanomas, but it’s likely that it is a combination of factors, including environmental and genetic factors. No matter what these factors are, doctors still believe that UV exposure and tanning beds are the leading cause of melanomas.

The best treatment course for your melanoma will depend on the size and location of your cancer, your current health, and of course, personal preferences. Treatment options for smaller cancers usually include removing the entire melanoma; however, if the cancer is larger or has spread, there are other available options.

What You Can Do?

It’s important that you always take care of your skin, especially if you’ve experienced skin cancer in the past. But it’s just as important to make sure you have a dermatologist you can trust and rely on. You can contact us today at (336) 774-8636 to set up an exam or to simply learn more about our products and services. Your skin and your health is our passion here at Winston Salem Dermatology.

Because of the current "shelter in place" due to the Novel Coronavirus, Winston Salem Dermatology is providing telemedicine visits for our patients.

This will enable virtual (evisits) or telephone visits for simple problems (acne, eczema, poison ivy, etc.) and refills. Call us at (336) 774-8636 and we will explain how it works.

Please also remember according to our shelter in place guidelines you may visit for medical services that cannot be provided virtually. Again, please call first. We are equipped with the necessary protective equipment to see patients safely.