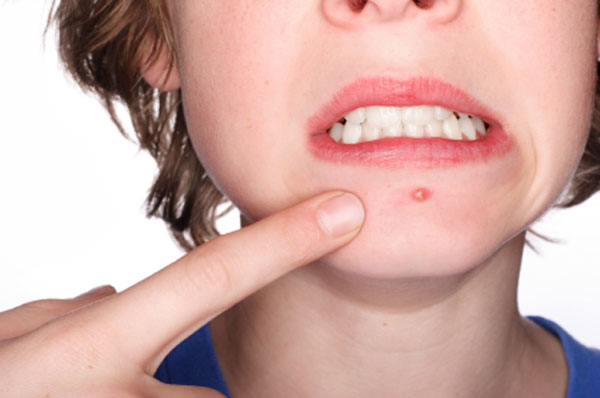 Did you know that acne is the most common skin disorder in the United States, affecting 40 million to 50 million Americans?

Nearly 85 percent of all people have acne at some point in their lives, most often on the face, chest, and back. Acne is a skin condition that consists of pimples, deeper bumps (cysts or nodules), and plugged pores (blackheads and whiteheads), that occur on the face, neck, chest, back, shoulders, and even the upper arms.

Acne usually begins in puberty, can occur at any age. By mid-teens, more than 40 percent of adolescents have acne or acne scarring, which requires treatment by a dermatologist. Acne is caused by three major factors: overproduction of oil by enlarged oil glands attached to hair follicles in the skin, blockage or plugging of the hair follicles, and a bacteria, called P. acnes, within the hair follicles.

Scientific research has led to many new acne therapies and changes in existing treatment options.

To prevent scars, do not pop, squeeze, or pick at acne; seek treatment early for acne that does not respond to over-the-counter medications. Gently wash affected areas twice a day with mild soap and warm water. Vigorous washing and scrubbing can irritate your skin and make acne worse. Use products that are labeled non-comedogenic (does not clog pores), and use oil-free cosmetics and sunscreens.

Avoid alcohol-based astringents, which strip your skin of natural moisture. Use medication as directed and allow enough time for acne products to take effect, which might be a long as six to twelve weeks. See your dermatologist for successful diagnosis and treatment of acne.