To the novice, microblading sounds like something you might do out in the park on a sunny day. But microblading isn’t a form of recreational exercise, and it shouldn’t be confused with rollerblading, either. Even if you don’t know exactly what microblading is, chances are good that you’ve seen some examples of microblading if you:

So what is microblading, exactly? It’s a semi-permanent way to achieve fuller, natural-looking eyebrows without having to apply any daily eyebrow penciling or filling! Microblading doesn’t involve any surgery, either. It’s a cosmetic procedure where pigment is inserted into the surface layer of your skin using a fine needle or blade. Microblading produces well-defined, fuller-looking eyebrows, and the effect can last anywhere from 18-30 months. As professional cosmetologists like to describe it, microblading is a type of eyebrow architecture which helps to create the best shape for each individual face.

What Are Some Specific Benefits of Microblading?

How’d you like to have perfect eyebrows without having to put in any daily effort? Microblading can provide you with that desired result, and it’s great for people with naturally thin eyebrows, reduced hair growth, or those affected by related medical conditions.

• Gives you precious minutes back every morning

Let’s be honest – putting on makeup and preparing your face can sometimes feel like a chore, and can take up a good bit of time in your morning routine. With microblading, you’ll save precious time every day but not having to worry about filling in thin eyebrows or doing any last-minute tweezing or eyebrow sculpting.

• Brand-new brows in less than 2 hours

Did you know? A typical microblading procedure only requires between 90 and 120 minutes to complete. In other words, you can get perfect brows in less than 2 hours! And there’s essentially no downtime, so you can show off your microblading results that same day. You can go straight from the provider’s facility to wherever you need to be!

Sometimes you’ll come across a person with odd-colored or mixed-colored eyebrows, and sometimes that person may even be you. But not with microblading. Microblading pigments are organically based and specially formulated to maintain a consistent color. These pigments don’t fade, but simply wear off naturally over time.

Microblading isn’t like applying normal makeup, so it won’t smudge or smear in any way once the procedure is completed. You can enjoy all the swimming, saunas, jacuzzis, and sweaty workouts you like, without worrying about having to touch up your brows afterwards.

It’s almost impossible to tell the difference between a natural eyebrow and one that has been micro-bladed by one of our talented professionals at Winston-Salem Dermatology!

Microblading is a non-invasive treatment which results in perfect eyebrows for anywhere from 18 months up to two years! Your micro-bladed eyebrows will retain their shape and size with nothing more than some occasional touchups.

Microblading is completely safe, comes with no side effects, and can provide you with perfectly-shaped brows in a procedure that’s non-invasive and virtually painless. There’s really no downside!

Once you have your microblading procedure done, you’ll have a perfect blueprint on your brow area for any future microblading treatments. In other words, it’s even easier the next time around, unless you decide to create a different look. And that’s another great thing about microblading – you can decide to create pretty much whatever look you want for your eyebrows!

While it does cost something to have a microblading procedure performed, it’s an investment you’ll quickly recoup over time. Once you take into account all the money & effort you’re currently spending on brow pencils, eyebrow waxing, shaping, brushes, and tweezing, you’ll quickly realize that choosing microblading can actually save you a good bit of money and unnecessary stress. 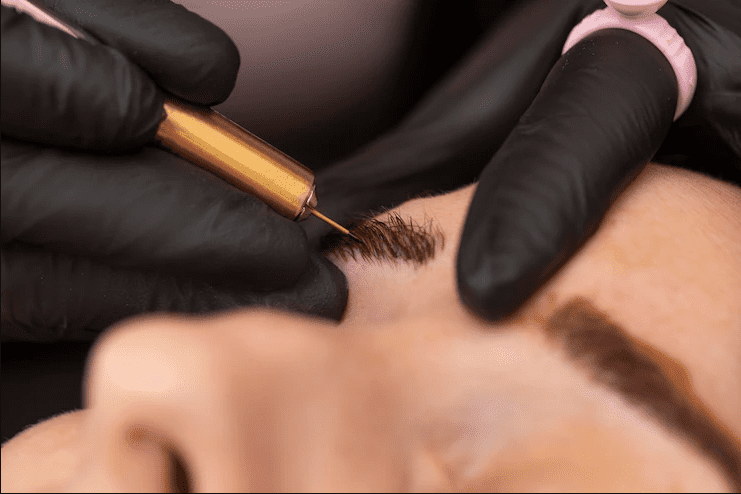 How Does Microblading Work?

Microblading itself is a very precise, yet relatively uncomplicated procedure. This is thanks in part to the specific elements involved. A pen-like tool is used with a sloped blade that contains 10-12 tiny needles at the end. These needles don’t penetrate deep into the skin, but rather just scratch the surface, much like what you would experience with a paper cut.

The microblading needles are applied with featherweight strokes, and a medical-grade pigment is then imparted into the epidermis layer. The result is very fine, very realistic, and very natural-looking strokes which closely resemble the look of real eyebrow hairs.

Is Microblading the Same as Getting Eyebrow Tattoos?

No, it isn’t. Microblading doesn’t press into deep layers of the skin like tattooing; rather, microblading keeps to the skin’s surface. And while tattoos are essentially permanent, the colors imparted by microblading will eventually fade and fall off in the span of 18-24 months.

Microblading hair strokes are finer and more natural-looking than traditional tattoos. The microblading procedure involves the use of a handheld, hand-powered needle/blade; tattooing makes use of an electric-powered instrument which delves much deeper into the skin.

It honestly sounds much more painful than it really is! If you’ve ever had your eyebrows threaded, it feels very similar to that. Patrons describe it as uncomfortable, but not truly painful. It feels more like a series of tiny scratches than anything else. Plus, the microblading specialist will begin by applying a numbing cream to the entire eyebrow area, to help minimize the effects of any unpleasantness. And the whole procedure can be completed in a matter of an hour or two, so it’s really not a whole lot to have to endure.

Once the microblading treatment is complete, post-care is fairly simple. If you’re going to be outside at all, you’ll want to apply a good sunscreen, as this will help to extend the longevity of your brows and also help to prevent against any premature fading. Once your skin is completely healed (normally takes about a week), you can go back to your normal skincare and makeup routine.

One word of advice: don’t entrust a microblading treatment to someone who isn’t a trained microblading specialist. In the Piedmont Triad area of NC, your best option is to partner with the pros at Winston Salem Dermatology! We’re experienced and well-equipped to provide the best quality of microblading, and we can also take care of all your other cosmetic skincare needs.

Got questions about microblading? Ready to learn more, or ready to get started? You can easily connect with us online, or for an even faster response, you can simply give us a call at (336) 774-8636 today!