Sclerotherapy is the standard treatment for varicose and spider veins. Spider veins are small, enlarged, superficial blood vessels that appear red, blue, or purple, and commonly occur on the legs.  Larger dilated blood vessels called varicose veins may be raised above the skin surface and may occur along with spider veins.  The cause of spider veins is not completely known, but in many cases they seem to run in families.

Spider veins occur in both men and women, but occur more frequently in women.  Female hormones may play a role in their development and puberty, birth control pills, pregnancy, and hormone replacement therapy seem to bring them out.  They may also appear after an injury.  In sclerotherapy, a sclerosing solution is injected directly into the blood vessel with a very fine needle. 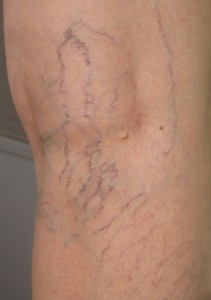 How Does Sclerotherapy Actually Work?

The solution irritates the lining of the vessel, causing it to swell and stick together.  Over a period of weeks, the vessel is absorbed by the body and becomes barely noticeable or invisible.  A single blood vessel may have to be injected more than once, some weeks or months apart, depending on its size.  In any one treatment session a number of blood vessels can be treated.  After several treatments most patients can expect a 50 to 90% improvement.  However, fading is gradual, usually over months.

Disappearance of spider veins is usually achieved, but similar veins may appear in the same general area over time. Between treatments, it is recommended to use support hosiery, which may help seal the treated vessels, keep the blood from collecting under the skin, and reduce the development of dark spots.  It may also reduce the number of treatments necessary, and the possibility of recurrence.